When I left the NFL League as a Special Teams Coordinator in 2007, my goal as a kicking coach and consultant was to help as many kicking specialists achieve their dream and have a chance to play professional football. Subsequently we coined the term - 'A Specialists Path to PRO Football'.
For over twenty years, I have attended the Senior Bowl in Mobile, Alabama to either find a job, see coaching friends in addition to evaluate and critique the kicking specialists in attendance.
This year was a little different.  I was there solely to support and observe three of my prized One on One Kicking and Punting students perform in the 2012 Senior Bowl practices and game.
Five years ago, I started working with Brad Nortman after he graduated from high school and accepted a scholarship from the University of Wisconsin.  Four years ago I started woking with Drew Butler when his father Kevin Butler (Chicago Bears) brought him to me during his red shirt freshman year at the University of Georgia.  Three years ago when Randy Bullock was a sophomore at Texas A & M, he attended my 2009 PRO Development Camp in Phoenix, Arizona.
Five, Four, Three, and Two years ago I met and started working with punter, Kyle Martens (Rice University) after he attend one of my PRO Development Camps.  Kyle was not invited to the Senior Bowl but is playing Feb 4th in the Players All-Star Classic in Little Rock Arkansas.  Kyle however, has been invited to the NFL Combine in late February.
In the last four years Coach Zauner's One on One Lessons have produced results for NFL Kickers: Sebastian Janikowski (2012 PRO Bowl), Billy Cundiff (2011 PRO Bowl), Josh Scobee and NFL Punters:  Jon Ryan, Dave Zastudil, Brett Kern and many other Pro Specialists.
As I have continued to work as a kicking coach, I have come to believe more than ever that 'A Specialist's Path to PRO Football' is a process that should begin and evolve during a specialist's college career with proper technique and training.
Now, One on One Kicking, Punting and Snapping Lessons and PRO Development Camps have also paid dividends for Randy Bullock, Drew Butler, Brad Nortman and Kyle Martens. All four of these specialists have not only attended my PRO Development Camps and taken One on One Lessons, but they are also currently training in Phoenix, Arizona preparing for the 2012 NFL Combine February 22-28, 2012, their college PRO Day as well as the NFL Draft this April.
2012 Senior Bowl Photo Gallery:

The North Team Defeated the South Team 23 to 13 in the 2012 Senior Bowl
I would like to wish all the 2012 College Seniors the best of luck
in the upcoming 2012 NFL Draft and a future in the NFL.

The Value Of A Good College Education 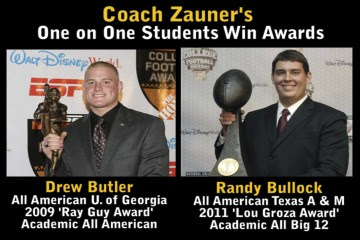 I consider coaching or playing football at the highest level to be a privilege and honor.
Since I was a kid, playing in the NFL was always a dream and goal of mine.
After finishing my college playing career as a Punter/Kicker and QB at the University of Wisconsin-LaCrosse I had to make some decisions.  I had finished my Bachelors Degree and and was now working on my Master’s Degree in Education while training for some NFL workouts.
My hard work finally paid dividends when I was invited to a workout with the Minnesota Vikings and was rewarded with a free agent contract.
After going to training camp in 1973 with the Minnesota Vikings and 1974 with the Houston Oilers as a punter/kicker and being released during training camp my dreams of being a NFL punter or kicker were diminishing. The reality was I was maybe not going to be an NFL kicking specialists.
While playing semi pro football I injured my right knee and had major surgery. My punting and kicking career was coming to an quick and abrupt ending.
My 'dreams' as a player were fading but the 'reality' of getting a real job was becoming more apparent.
As I trained and played college, semi-pro and had stints with two NFL teams I created a parallel path of following my childhood dream and also getting an education. My ‘Path to PRO Football’ was now changing.  I was realizing my playing days were over and I wanted to be a coach.  An NFL Coach and Special Teams Coordinator.
Getting my Master’s Degree was one of the most important decisions I made in my life. It not only provided me with a back-up plan, but it also introduced me to my passion for teaching and coaching.
After teaching and coaching at the high school level for five years, I was fortunate enough to get a graduate assistant spot at Bringham Young University coaching kicking specialists under head coach LaVell Edwards.
In 1980 Doug Scovil hired me at San Diego State as his Special Teams Coordinator and I was the first full time special teams coach in NCAA history.
With hard work and a little bit of luck, I was able to continue 11 more years in the collegiate level, which led to 13 seasons in the NFL. Also, knowing that I always had a backup plan took some of the pressure away because I knew that I would always be able to provide for my family.
Student-athlete is a term that very often is overlooked, and the term STUDENT should be overemphasized. Having a plan for your career and a good education will set you up for the rest of your life. I cannot stress enough how important having an education is. No one can play football forever, and there is a point in time where everyone must come to that reality.
My motto with young athletes is, ‘Have a passion to follow your dreams but know there is a reality of life.’
I am very proud of Drew Butler (University of Georgia) and Randy Bullock (Texas A&M) because they have achieved success on and off the field.  Both come from excellent family backgrounds and have worked hard to become college footballs elite punting and kicking specialists. The Ray Guy and Lou Groza Awards are to recognize college’s best.  Both have achieved these top awards during their college careers.
Both of these scholar-athletes have also received some of the highest academic honors as well.  Drew was selected as an Academic All-American for the past two years as well as graduating Cum Laude with a degree in Telecommunications a semester early. Randy was also named Academic All Big 12 and is graduating with a degree in Petroleum Engineering.
However, all these awards including the prestigious Heisman Trophy do not guarantee anyone an NFL career.  Getting into and staying in the NFL is hard and very competitive.
It is based upon talent but having a little bit of luck and being in the right place or team at the right time can help, but having an education can set the sky as the limit.
I wish Randy and Drew the best of luck in this year’s upcoming draft and hope that they have long and prosperous NFL careers. However, no matter what happens in football, I know that these young men will succeed in their endeavors in life, as they have set themselves up for success. And...
‘There is life after football.’
Note: Drew Butler and Randy Bullock will be training here in Phoenix, Arizona in preparation for the 2012 Senior Bowl and NFL Combine.
Stay Tuned for More of Coach Zauner's Blog!

Michigan's kicker, Brendan Gibbons kicks game winning
field goal in Sugar Bowl to defeat Virginia Tech.
Brendan Gibbons has gone from the outhouse to the penthouse, zero to hero or  a nobody to a somebody in just about a year.  Who knows he might be on Jay Leno.  Why?  He made one of the biggest kicks of his career.
Last night, Michigan kicker Brendan Gibbons made an overtime game-winning 37-yard field goal to defeat Virginia Tech in the 2012 Sugar Bowl in New Orleans. With the game coming down to special teams more times than not, Brendan gave his team the winning edge by hitting his third FG of the night to finish 13 of 17 on the season!
Brendan Gibbons first worked with me at my January Arizona PRO Development Camp in 2011 and followed up with several One on One Kicking Lessons throughout the year. After struggling in the 2010 season going 1 of 5 in field goals, his goal was to improve and solidify himself as the number one kicker for the University of Michigan.
When we first met and worked together his passion and desire to improve was evident, however it was fundamentals that Brendan was lacking. As we continued to work together, we focused not only on his kicking technique, but also getting his confidence back. 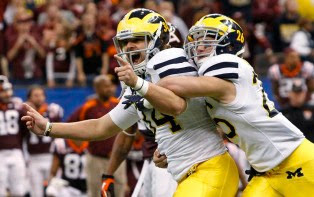 As This Article Mentioned - Zero to Hero
As Brendan continued working during his football kicking lessons this past year, as a kicking coach I could easily see his improvement on the practice field. The key was how he would perform with his new kicking technique during competition and during a real game.  His dedication, hard work, and this seasons game experience has renewed his confidence and made him a much better kicker today.  Better technique and confidence is the key to every  athletes success.
During this 2012 Bowl season we have watched several kickers miss and make game winning field goals. Confidence, tempo and not changing your kicking technique is so important during pressure situations.  What made Brendan's field goal even more remarkable was, he took a false step but stayed relaxed and still kicked up and through the ball with the proper kicking mechanics.


Being able to make game winning pressure kicks can be one of the most important attributes a kicker can have and the best way to learn is on the job training.


As a teacher I have always graded my students on their progress and improvement.  Brendan gets an A+ for his improvement with his kicking technique from last year to this year.  His final exam was his performance in the 2012 Sugar Bowl.
Congratulations Brendan, and continued success!