Australian Rules Punters Working To Get To NFL. 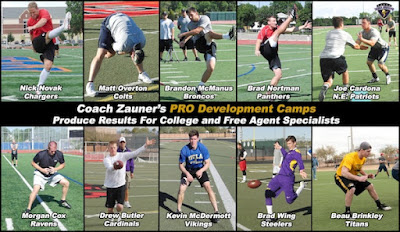 I have notice one thing about most Australian rules punters that have come to the United States and have played or are now playing college football. They all have natural foot skills, leg strength but most lack what I term a NFL punting technique. They can run and punt or punt on the run which is a part of their Australian rules football game but lack an, in the pocket NFL hang time punting technique.

I firmly believe if most Australian rules punters were coached better on a NFL punting technique they would have a better chance of making the transition from the college game to the NFL.

In 1994 Darren Bennett came to San Diego looking to make the transition from Aussie Rules Football to the NFL. He received coaching and played in the 1995 NFL Europe Football League for one season.  He came back from Europe and in his first 1995 NFL Season with the San Diego Chargers, he was selected to the PRO Bowl. 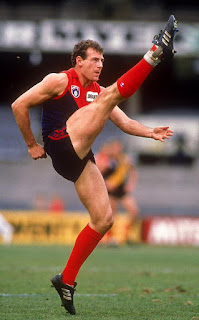 Sam Irwin-Hill and Paul Jones both have selected another path.  Both men have been referred to me by other college specialists knowing they must get better and in need of more exposure to NFL teams.

Coach Zauner's College Senior and Free Agent Combines are producing exposure and results for many college specialists NOT invited to the Senior Bowl or NFL Combine.
I hope Sam and Paul have benefited from their ONE on ONE Punting Lessons. Paul is looking to attend the Coach Zauner 2016 College Senior Combine and Sam has just qualified for the 2016 Free Agent Combine.

Listen to both of their testimonials after ONE on ONE Lessons with Coach Zauner.

I first met Sergio Castillo when he was a college freshman at West Texas A & M.  After seeing him kick for the first time, I must say Sergio has improved leaps and bounds on his field goal and punting technique and that is why he is now playing professional football.

After four years of College Football at West Texas A & M Sergio received the Fred Mitchell Award and was selected as the All American Kicker for his division.
After attending my College Senior Combine he was signed by the Atlanta Falcons.  The following year he attended my Free Agent Combine which featured 25 NFL Teams and 4 CFL Teams.  The CFL teams that attended were all over him after watching him kick and punt.  The Hamilton Tiger Cats signed him and put him on their practice squad but later had to make a roster move and had to release him.

The Toronto Argonauts wanted him earlier in the year but now the Winnipeg Blue Bombers signed him.  Isn't it nice to be wanted. Basically all the teams that saw him at my Free Agent Combine were in hot pursuit.
Since he has been up in Canada Sergio has called me every week with an up date.  Last week he called and gave me the good news.  "Coach,  their starting me this weekend."  He has worked hard and deserves the chance.

He got his start and has made the most of it.  He kicked four field goals and his 5th was a 41 yard Game Winner!    It doesn't get any better than that!  Way to go Sergio!  Continued Success. 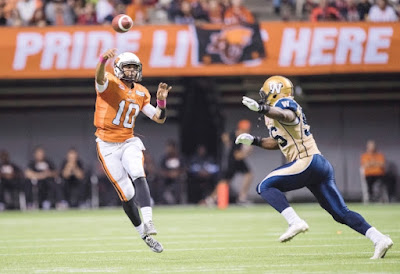 
Coach Zauner's Programs Are
'A Specialists Path To PRO Football'