After his fight with cancer, Rob Long is trying to pursue an NFL career. Rob has attended my January PRO Development Camp for punters and snappers along with recently qualifying for the 2013 Coach Zauner Free Agent Combine.
I thought others would enjoy a video and story depicting a strong inspirational and motivational spirit as Rob continues to pursue his dream with dedication.


Below is an email I recently received;

I wanted to share a story with you in hopes you could feature it or tweet it out for us. It's about Rob Long, Syracuse's Punter from 2007 - 2010. He was a Freshman all-american, first team Big-East two years in a row, and then, his senior year he was diagnosed with a brain tumor. This halted his journey to the NFL and this project is dedicated to help him get back there. The tumor was the size of a tennis ball, he beat it entirely and is now in the best shape of life.   Any media support you can give us would be a huge help.


On a personal note I would like to wish the best for Rob as he continues to follow his NFL dream.

In the fall of 2010 I was on vacation in San Diego, CA and somebody asked me if I had heard about a young kicker from Patrick Henry High School and Grossmont College JC that had just received a kicking scholarship to the University of Georgia.

I said "Not really".  However, I wanted to check him out because during that time I was training University of Georgia punter, Drew Butler the recipient 2009 Ray Guy Award Winner.  Drew said Brandon had a big leg and was brought in to compete with Blair Walsh.

So, as time moved on and I continued coaching Drew Butler through his college career I kept my eye on Brandon's progress and the kicking competition between Blair and Brandon.

The bottom line is there was never really any true competition.  As I watched the situation the University of Georgia coaching staff made Blair Walsh the starting kicker and Brandon was the backup.

As it turned out they must of been right.

Blair Walsh graduated and was invited to the 2012 NFL Combine.  He then was drafted in the 5th Round by the Minnesota Vikings.  In his rookie season he went on to become a PRO Bowl kicker.

Brandon graduated and went back to San Diego with no real resume or highlight video.

When I was a high school, college and NFL coach one of the best traits I was known for was personnel. Finding talent.  Finding young kickers, punters and snappers and then developing talent.

During Drew Butler's final college season I headed to Athens Georgia for his Senior Day.  During pre-game I had an opportunity to see Brandon kick live in the warm-ups. I liked what I saw.

However, month's past and Brandon was now back in San Diego, California working for his father.  As I continued working with Drew he mentioned that Brandon was still kicking, attending some kicking camps and was still interested in pursuing a NFL kicking career.

So, I called Brandon last summer and mentioned what I do and explained my program.  Brandon said he had heard about me and was interested in attending my 2013 Free Agent Combine.

I then mentioned a couple of kicking mechanical things I had seen when I saw him kick live at his Senior Day. We discussed my philosophy teaching 'A Natural Style of Kicking and Punting'.

Brandon said he would talk to his father and get back to me.  We set a date for a One on One Kicking Lesson in November of 2012.  After two days of kicking Brandon and his father saw some excellent results.

I knew at that time if Brandon bought in to Coach Zauner's Programs and a more 'Natural Style of Kicking' I could get him the exposure he needed and deserved at my Free Agent Combine. I also knew this young man had NFL kicking talent.
The only mistake that Brandon might have made was accepting a scholarship to the University of Georgia and playing behind Pro Bowl Kicker, Blair Walsh.  Or it might have been the best decision he made because of the high level of competition everyday in practice against Blair.

It is what it is and we both agreed things happen in life and you just move on.  And move on he did.
I mentioned to Brandon to go back to San Diego for a couple of months and work on his new 'Natural Style of Kicking' technique.

Brandon came to the kicking camp with a much improved kicking and kickoff technique. On Sunday he was one of three kicking field goal finalists.

Brandon showed improvement.  He was also building more self confidence by beating 25 other kickers in a PRO Development Camp kicking contest.  He was feeling pretty good about himself.

The real question and test was now coming up.  How would Brandon do in front of 20 NFL Special Teams Coaches, Pro Personnel Directors, Scouts and a full field of excellent Free Agent Kickers.  Many of which had already been in NFL mini-camps, training camps and were ranked as the top UFL and Arena League Kickers.
Brandon was one of a handful of kickers that completed the field goal contest and moved into the bonus round. The bonus round of field goals started at 51 yards and moved back in three yard increments.
The group of nine dwindled to a group of five kickers.  At 61-yards Brandon missed his first field.  He made the next.  Brandon Bogotay (U. of Georgia) and Dave Teggart (U.Conn) ended up as the field goal contest champions.
At the conclusion of the field goal contest, which was the last event of the day for everyone, specialists and coaches ran to catch flights. There was some very positive feedback from NFL Special Teams Coordinators and Directors of Pro Personnel about several kicking specialists.  Coaches had already received contact phone numbers lining up tryouts in weeks to come.
On Wednesday a day after the Free Agent Combine players were calling me with thanks for the Combine opportunity and the exposure they received.  One player, Jacob Schum a punter from the University of Buffalo had already agreed to a Free Agent contract Wednesday morning.

Brandon Bogotay then called.  He mentioned he had two teams Seattle and Cleveland fighting for his services. I knew there were also two or three others teams that were eventually going to call him.

In the next week Brandon had workouts with Seattle and Cleveland.  Both teams fought hard to sign him but he and his agent decided that Cleveland would be the best situation for him.  Phil Dawson the Cleveland Browns Pro Bowl kicker had moved on to San Francisco 49ers and Cleveland needed a kicker.

Brandon signed and is now in mini-camp.  Chris Tabor Cleveland's Special Teams Coordinator called a couple of weeks ago and said Brandon went 23 of 24 on field goals in his first mini-camp.

My thought was "not bad for a back-up college kicker".  History has shown that there have been several backup college quarterbacks and running backs that have become starters in the NFL.   They just went to a University that had a great player playing in front of them and all they needed was a chance to play in the NFL.

I wish Brandon the best of luck in the future. My fulfillment as a kicking coach comes from seeing such a nice young man make the most of his opportunities.  As I say 'Coaches Coach and Players Play'.  Brandon deserves all the credit for his hard work and success.

I believe he made the right decision coming to Phoenix, Arizona for a One on One Kicking Lesson and embracing 'A Natural Style of Kicking'.  Click below to Listen to Brandon Bogotay's Testimonial after working with Coach Zauner: 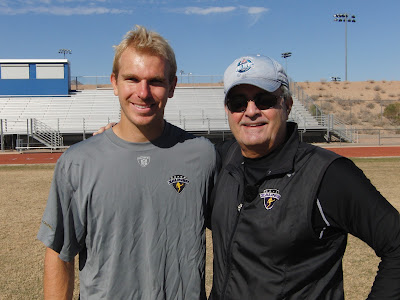