COACH ZAUNER'S PROGRAMS ARE
'A SPECIALIST'S PATH TO PRO FOOTBALL'

I first met Drew Ferris in February of 2015 when he attended Coach Zauner's 2015 College Senior Combine in Gilbert, Arizona at Camp Verde High School.  Drew had a very impressive snapping performance however, he weighed in at 222 pounds.  He definitely had NFL potential but was undersized.

Now, in 2016 he attends Coach Zauner's 2016 Free Agent Combine which is also attended by 27 NFL and 4 CFL Teams.  He once again puts on a very impressive showing but now weighs in at 236 pounds.  He not only snaps well, runs well but also interviews well.
After the combine several NFL Special Teams Coordinators talk with Drew and invite him in for additional workouts and physicals.  The word gets out and the recruiting war is on for this young man snapping talents.
The recruiting process goes on for only a couple of days and by the end of the week Drew agrees on terms with the Seattle Seahawks.
In the past seven years Coach Zauner's Snapping Programs have produced (17) snappers on NFL & CFL rosters. (15) snappers on NFL rosters and (2) on CFL rosters.
Other College and Free Agent Snappers who have made NFL rosters through Coach Zauner's Combines are: Morgan Cox (Ravens), Justin Drescher (Saints), Christian Young (Browns), Beau Brinkley (Titans), Kevin McDermott (Vikings), Matt Overton (Colts), Kyle Nelson (49ers), John Weeks (Texans), Nick Sundberg (Redskins), Andrew DePaola (Buccaneers), James Winchester (Chiefs) and most recently Rick Lovato (Green Bay Packers).
Coach Zauner's Snappers ONLY 'Vital Man' Training Camps are growing bigger each year.  More and more snappers are hearing about Coach Zauner's Snapping Programs. If your a snapper that is looking to improve your snapping, blocking or coverage technique than check out Coach Zauner's Snapping Programs at Coach Zauner's Locker Room
In January of 2016 I had my first Snappers ONLY Camp in Fountain Hills, Arizona and 34 snappers attended.  This summer in Milwaukee, Wisconsin on July 15-17, 2016 I will have my second Snappers ONLY Camp.

Coach Zauner's ONE on ONE Snapping Lessons,
Snappers ONLY Camps, and Combines are
'A Specialist's Path To PRO Football' 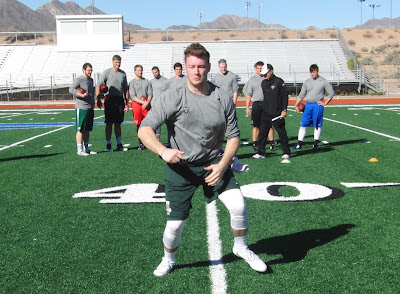 Taybor attended Coach Zauner January 15-17, 2016 Snappers ONLY 'Vital Man' Camp.  He was one of thirty-five snappers attending.  He came to work on his snapping and blocking technique.
At 6'5 235 pounds Taybor has the size to catch  the eye of NFL coaches and scouts.  The biggest transition college snappers need to make is to perfect their blocking technique if they plan to make an NFL roster.  Taybor is working to perfect all phases of his snapping game.

Since I met Taybor in January I've only seen a hard working young man with a lot of NFL potential.  Size, snapping ability and good agility.  Taybor was one of the six snappers that I recommended to NFL Coaches as Top Potential Snappers.  The 2016 College Senior Combine yielded at least 10 snappers that will catch the eye of NFL personal.  I wish all of them the best of luck in the upcoming months.

I wish Taybor the best of luck on his PRO Day and in the upcoming 2016 NFL Draft! 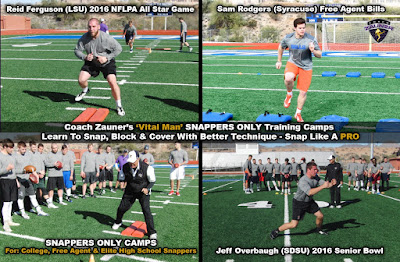