Chris Gould One on One

On Tuesday and Wednesday of this week Chris Gould was in Phoenix, Arizona for some One on One Kicking Lessons. 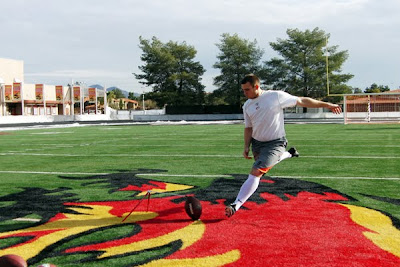 A couple of months ago Robbie Gould (Chicago Bears Kicker) called me and asked if he could send his younger brother (Chris) down to Arizona for some One on One Kicking Lessons.

When I was the Special Teams Coordinator for the Baltimore Ravens we signed Robbie Gould to our practice squad for about 3 or 4 weeks. During the time we worked together I could see that he was a very talented kicker.

The problem was the NFL's 80 man roster rule. We had to make some roster decisions and we ended up having to release Robbie rather than develop him. At that time Matt Stover was kicking at a very high level and Robbie was released.

It was bad news back then but good news weeks later when Robbie worked out for the Chicago Bears and was signed and became their starting kicker. He went to the Pro Bowl two years later and is now entrenched as the Bears kicker.

After working two days with Chris Gould I can see he has the potential to also be an excellent kicker. 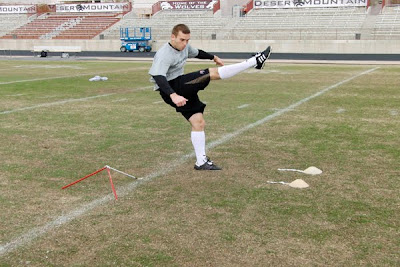 Chris had a couple of minor flaws in his technique. After watching him kick and reviewing the video I introduced a couple of drills to get Chris to kick more up and through the ball.

After working a couple of drills, Chris could feel and see some positive results.

After two days of One on One Kicking Lessons Chris was kicking up and through the ball much better and was kicking the ball with much better consistency. I told Chris to go back home and work the drills and practice for two to three weeks and give me a call.

It was a pleasure meeting and working with Chris and I wish him the best of luck in the future. Chris would like to come back to my Free Agent Combine March 27 - 28. If he keeps improving and becomes more consistent he should have no problem qualifying for the event. 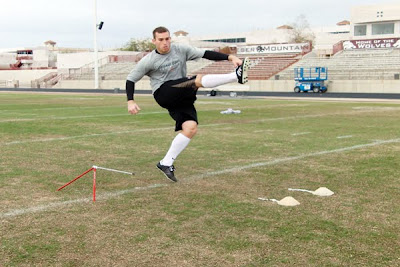 All the punters wanted me to evaluate them and let them know if they had enough punting talent or what they needed to do to get better and have a chance to get an NFL tryout.

Other Aussie Rules players like Darren Bennett (Chargers and Vikings), Sav Rocca (Eagles) and Ben Graham (Cardinals) all had massive legs and made the transition from Aussie Rules Football (Footy) to the NFL.

The answer after Monday's workout was 'No'. However, two punters Steve Baker and Courtney Johns did show some definite potential. Both Steve and Courtney have very good leg strength and hit some great punts. However, the key to both of these punters success will be consistency. That starts with a better drop.

Once a punter with a big leg has a better drop and starts hitting the ball with more consistency then you can really tell what his potential will be in regards to getting a college scholarship, NFL tryout or contract.

When and if they become more consistent the next factor will be how they compete and perform under pressure. The pressure of a tryout or Free Agent Combine like I have in Phoenix, Arizona in front of many NFL Special Teams Coaches, Scouts and Personnel Directors and competing against other talented American Punters.

On Monday I started the open workout with everyone understanding the difference with the Aussie Rules Drop Punt and the American (NFL) Punters nose down drop. In the first photo below I huddle all the punters and showed them photos of many of the NFL punters and their grip, drop, contact, and follow-through when they hit their best punts.

Next I let the punters show me their talent level.

The bottom line, after two hours of evaluation, drills and practice Steve and Courtney had the most potential.

In the next two days I had One on One sessions with both and saw even more potential.

Enjoy the photos and video interview below: 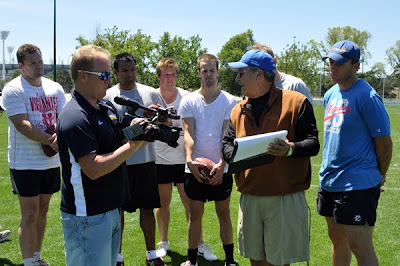 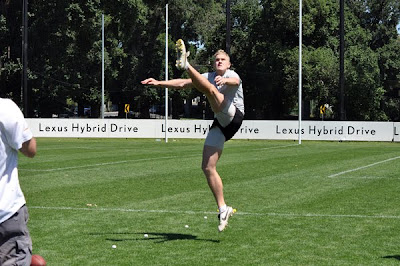 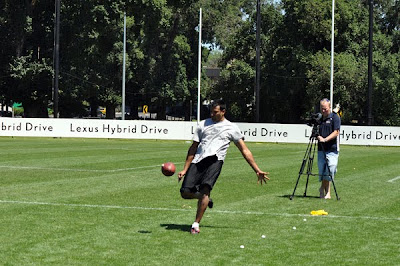 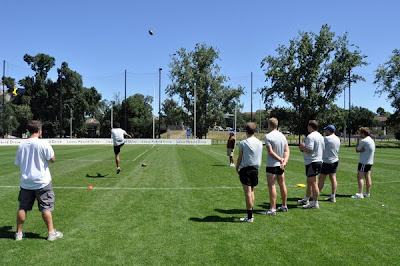 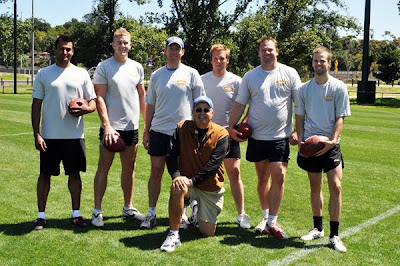 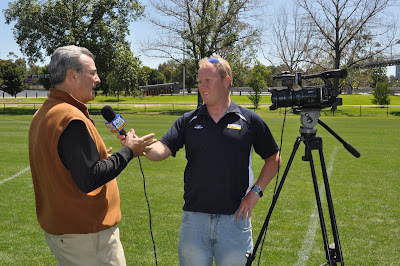 It was great meeting all the punters and working with them. The young Aussie's as a nation definitely have much better foot skills than the high school and college players back in the US.

I wish Steve and Courtney the best of luck in taking their games to the next level.

Click below to watch and listen to Dan Jones (Fox Sports News Australia) interview Coach Zauner about Aussie punters and their 'Path to the NFL'.

Thanks to Dan Jones (Fox Sports News) for doing this excellent video on the Aussie's Down Under. 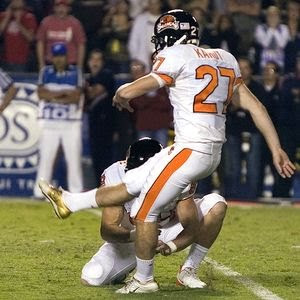 I would like to congratulate Justin Kahut for a standout season at Oregon State University. Justin came for some One on One Kicking Lessons with his friend Jake Weber (Portland State) this past off season. To read the rest of the article. Click

Oregon State University junior placekicker Justin Kahut has been named the final Pac-10 Conference Special Teams Player of the Week for the season after his performance in last Thursday’s game at Oregon.

Kahut, a junior from Portland, was perfect on four field goal attempts and three point-after-touchdown kicks for 15 points in the Beavers’ 37-33 loss to Oregon. He made field goals of 28, 29, 40 and 45 yards.

Kahut was also named the Special Teams Player of the Week for his 4-for-4 outing against UCLA Oct. 31.

For the season Kahut has made 22 of 27 (81 percent) of his field goal attempts, and is just one short of Alexis Serna’s school record total in 2005

Congrats again and good luck in the Las Vegas Bowl game against BYU. 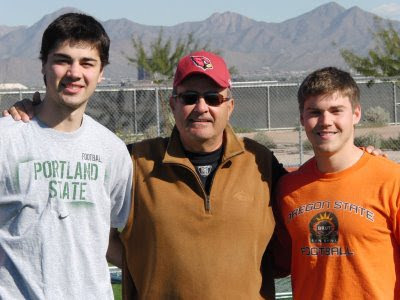 On Friday night a did a interview with 1116 SEN a sports talk show. The producer Tristan Foenander had seen an article in the Melbourne Sun Herold and asked if they could call and do an interview with me about Aussie Rules Football Players trying to make it in the NFL 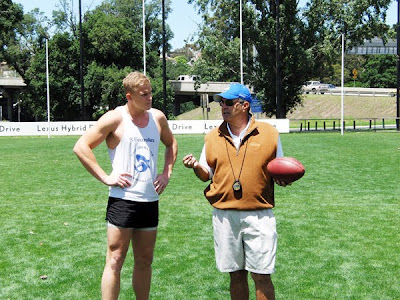 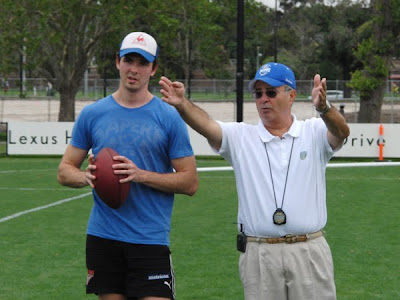 Coach working with Aussie Player Michael Harrington
Click to listen to a 15 minute Radio Interview with Australian Sports talk 1116 SEN Melbourne. The Topic is Aussie Rules Football Players trying to make it into the NFL. 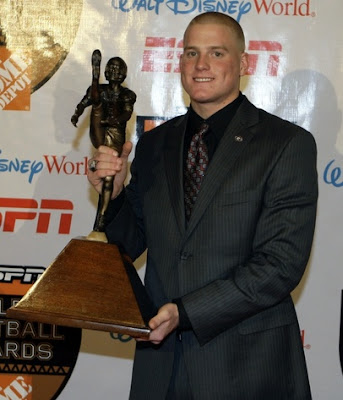 Good new travels fast, even when your in Melbourne, Australia. Today I received great news on two 'punting' fronts.

First, Sports Illustrated informed me the feature 'Punting' article that I was interviewed a few months ago for, was going to publication and would be on the news stands next week.

From what I understand, the article, written by John Ed Bradley is going to be the first 'full length feature' article on Punting that Sports Illustrated has done in over 30 years.

It will be great to see 'punting' back in the spotlight of one of the most popular sports magazines in the world.

Soon after I received the news about the Sports Illustrated article, my wife informed me that University of Georgia sophomore punter, Drew Butler had just won the 2009 Ray Guy Award.

This Spring Drew came to Scottsdale, Arizona for some One on One Punting Lessons. Then in late June, he came to work out with me at my PRO Development Camp in St. Paul, MN. 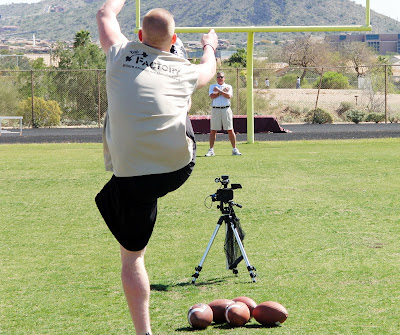 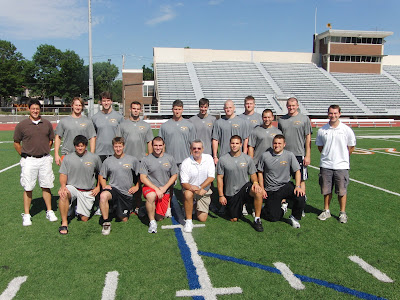 At his One on One Lessons I told Drew that if he kept working his drills, then without question he had the talent to 'play on Sundays'.

He looked at me and said, "Do you really think I have that kind of talent?"

And now Drew is answering his own question. 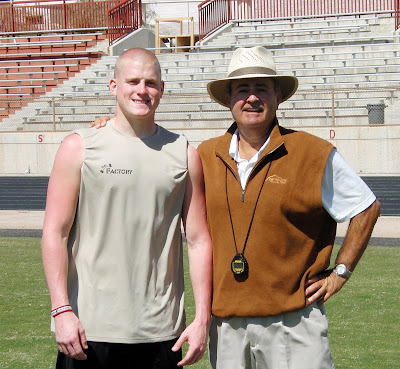