When I retired from coaching special teams in the NFL, it was still evident to me that the urge to coach was still in the bottom of my heart. Most of my life, I had coached the traditional soccer style kicking, however I then began to notice a big difference between more 'mechanical' kickers and 'natural' kickers. Because the best NFL kickers seemed to be more 'natural', it was then I decided I wanted to instill my philosophy of 'A Natural Style of Kicking' to not only specialists in the NFL, but to all kicking specialists.

After a year into coaching One on One Lessons, in 2009, Coach Zauner, LLC began to truly evolve into 'A Specialist's Path to PRO Football' as we started to offer our PRO Development Camp Program as well as the Free Agent Specialist's Combine. The success of the Free Agent Combine prompted me to introduce the College Senior Specialist's Combine to help college seniors who are not invited to the NFL combine gain more deserved exposure to NFL teams.

After doing some research, I am proud to say that not only have several NFL Veterans embraced and utilized Coach Zauner Programs such as One on One Lessons and the Free Agent Combines, but young aspiring specialists are also seeing results as well.

To date, 37 of 144 specialists on current NFL Training Camp Rosters fighting for positions have participated in Coach Zauner Programs. That's 25% of the NFL!

Scobee, who has continued his One on One Lessons for 3 years, recently had his best season kicking a career high 92% as well as tying an NFL record for the most 50 yard field goals in a single game. After Janikowski attended One on One Lessons to improve on long field goals, he elevated his game from kicking at 71% in 2008 to an average of 84% over the next four years with a high of 89% in 2009, including a NFL record tying 63 yard field goal!


NFL rookies also have benefitted this year through our College Senior Specialist's Combine as well as our specified NFL Combine training. Of the nine specialists in the 2012 NFL Combine, five of them have worked extensively with Coach Zauner, LLC in Brad Nortman (5 years), Drew Butler (4 years), Randy Bullock (3 years), Kyle Martens (2 years), while Carson Wiggs attended One on One Combine Training lessons.

Randy and Brad were also selected in 5th and 6th rounds of the 2012 NFL Draft!

The 2012 College Senior Combine was our most successful to date with seven participating specialists signing NFL contracts, five specialists with tryouts in the NFL, and not to mention Western Michigan kicker John Potter being selected by the Buffalo Bills in 7th round of the 2012 NFL Draft! In past years, the College Senior Combine has also helped gain exposure to current NFL players such as, Morgan Cox (Ravens), Justin Drescher (Saints), Christian Yount (Browns), and Travis Baltz (Jets).

To break down the numbers more, of the current 37 specialists in the NFL who have trained with Coach Zauner, LLC, 28 have participated in One on One Lessons, 11 have been showcased at the Free Agent Combine, while 14 participated in the College Senior Combine and 11 have been a part of our PRO Development Camps.

It is important to also note that there are several deserving specialists I have worked with that are currently searching for a team or have been on NFL rosters. Playing professional football is not an overnight process and it takes hard work, dedication, skill and perhaps most importantly, patience. It truly is 'A Specialist's Path to Pro Football' and Coach Zauner, LLC has proven it can help on that path. 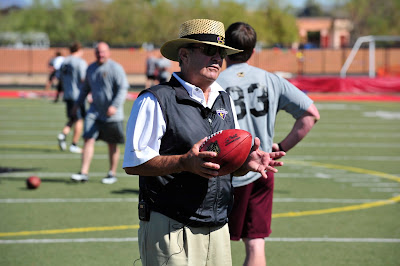 As proud as I am about having coached in the NFL and helping young men on 'A Specialist's Path to PRO Football', the philosophy of that phrase has much more meaning to it than just playing in the NFL. I truly feel that in whatever you pursue in life, you should always strive to be the best that you can be. I know that it is a privilege and very difficult to play in the NFL, let alone be lucky enough to sustain a long career. My ultimate goal is to give specialist's the best opportunity to succeed by taking their game to the next level and achieve their highest potential.

Long Snapping Lessons
Posted by Gary Zauner at 9:08 AM