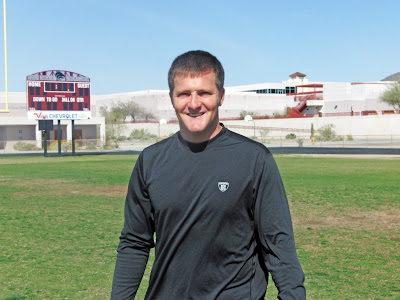 On Saturday and Sunday Jacksonville Jaguars kicker, Josh Scobee was in Scottsdale, Arizona for some Kicking Lessons.

Josh called me about a month ago looking for a another set of eyes to look at and critique his field goal technique. Josh in his own words had a tough year statistically, however he attempted a lot of long field goal which explains his statistically poor year. 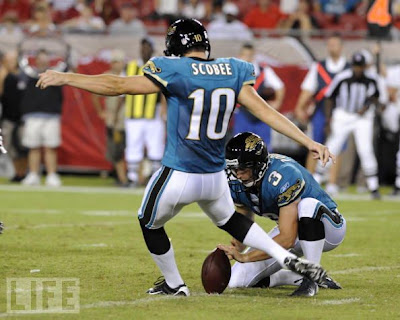 When I was the Special Teams Coordinator for the Baltimore Ravens I watched Josh kick at the NFL Combine and was very impressed with his trajectory and leg strength.

The first day I watched him go through his warm up routine, drills and took a bunch of sequential camera shots to evaluate his technique from various angles. After an hour of kicking we headed back to my office to evaluate the video.

During the video review I pointed out a couple of things I saw and made a couple of suggestions. I also showed him various other NFL kickers I had worked with in the last two years and showed Josh the drills I used with Garrett Hartley, Sebastian Janikowski and Billy Cundiff to emphasize some fundamentals. 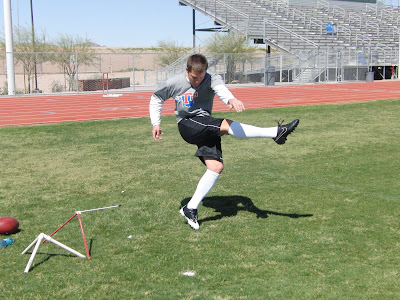 Josh mentioned he missed several kicks from the left hash so I checked out his perfect triangle, consistency at marking off steps, his aim or target line mechanics and approach to the ball. 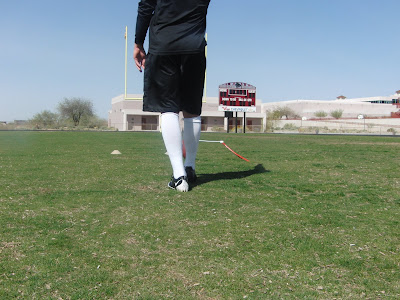 This is the time of year most NFL kickers take a break from kicking many balls. So, when we reviewed some of the kicking photos and video I pointed out the Josh had a tendency to crunch forward and cut some of his kicks.

The key was Josh wanted my opinion and wanted to get my evaluation. I also put together a progression of drills using my coaching technique of A Natural Style of Kicking and Punting that will help him emphasize kicking up and through the ball better and staying square to the target. 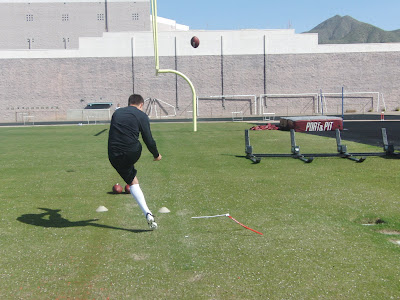 Josh was a quick study on day two. He quickly picked up on the drills and what we were trying to accomplish. He was starting to kick up and through the ball and kicking with less effort. He said he could really feel a difference.

The one thing I emphasized to Josh and all kickers with a big leg is to slow down. If you concentrate on hitting the sweet spot of your foot to the sweet spot of the ball the kick will travel with great distance and accuracy. After emphasizing to Josh to kick easy he launched a field goal. We measured the kick at 68 yards. 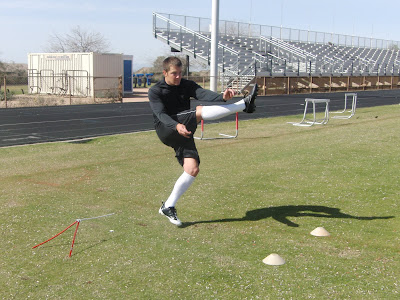 Josh is an excellent, scratch golfer. After our kicking lessons we had a chance to play nine holes of golf. I was amazed how far Josh could drive the ball. He launched several drives 300 plus yards.

My advice to both Josh Scobee and Sebastian Janikowski was to take driver -field goal kicking club- out of your bag and use a the 3 wood -kicking club-. It worked for Sebastian and I hope it will work for Josh.

Click below to listen to Josh Scobee's Testimonial on working with Coach Zauner:

It was a pleasure meeting and working with Josh Scobee. I wish him the best of luck in the future and hope to see him soon in the Pro Bowl. 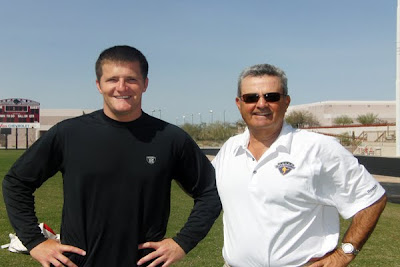 Posted by Gary Zauner at 8:31 PM Links to this post

It was a busy week having Kevin and Drew Butler plus Jeff and CJ Feagles in town for One on One Punting Lessons. 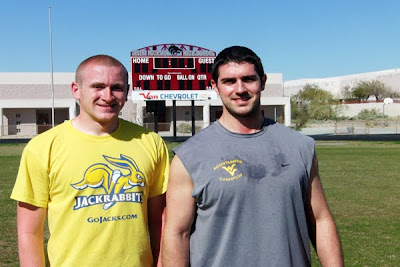 Later in the week Dean Priddy punter from the University of South Dakota and Tim Lindsey former snapper University of West Virginia arrived. The two were both here for One on One Lessons and also had an opportunity to work together.

Both left Scottsdale happy with the results of their One on One Lessons. 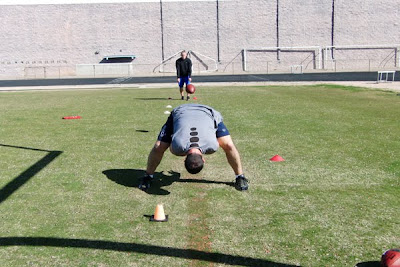 Danny Baugher former All American Punter at University of Arizona got in some extra work catching field goal and punt snaps for both individual.

Both Joey and Wilson came in to get better with their snapping technique and also get evaluated for my Free Agent Specialists Combine March 27th here in Phoenix, Arizona.

At the present time there have been 30 NFL teams, 4 CFL and 4 UFL teams confirmed to attend.

Both players went through two One on One Lessons and video reviews and were very happy with their improvement.

So, all in all it was a busy weekend end for me and a very productive weekend for all the players that came to Scottsdale, Arizona for their One on One Lessons. Not only good instruction, but excellent weather, a chance to work with others and meet new friends... it doesn't get any better than that.

Posted by Gary Zauner at 11:42 PM Links to this post

C.J. Feagles One on One Punting 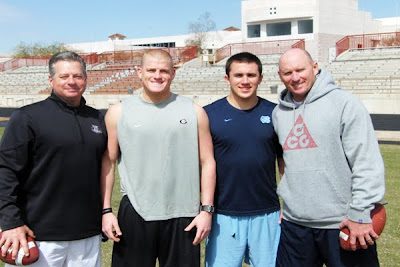 This past week former NFL kicker Kevin Butler, Chicago Bears and NFL punter Jeff Feagles, New York Giants flew to Scottsdale, Arizona with their sons for One on One Punting Lessons. 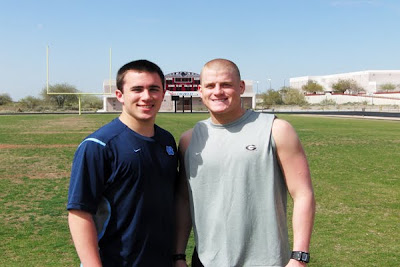 Drew Butler (right) was the starting punter at the University of Georgia last season and won the prestigious 'Ray Guy' Award for the outstanding college punter. Drew averaged 48.8 yards per punt and was the leader in the nation for gross and net punting average.

C.J. Feagles (left) was a red shirt freshman at the University of North Carolina last season. C.J. will be competing this spring for the starting punting position with several other specialists. 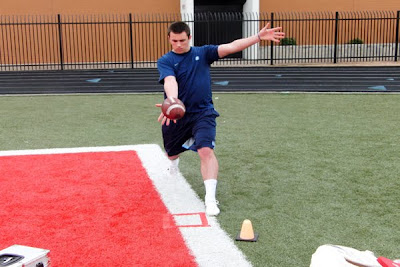 Several weeks ago Jeff Feagles after talking to his old team mate and friend Kevin Butler called me asking if he could bring his two son's to Scottsdale, Arizona for some One on One Punting Lessons. Jeff and Kevin were teammates with the Arizona Cardinals for a couple seasons and along with their son's have since remained good friends. 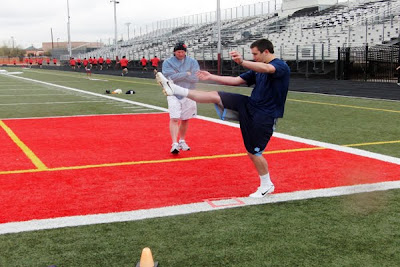 C.J. was a quick study in the two days of lessons. He listened and worked hard on all the drills. He quickly saw and felt some excellent improvement. C.J. was now punting up and through the ball with much more power and hitting a lot of Power Zone Punts.

In my goal post drill C.J. starting hitting almost every punt into the Power Zone with a spiral nose over result. View the video below to hear the reaction from the crowd... Jeff Feagles, Drew and Kevin Butler.

It was a pleasure meeting and working with C.J. Feagles and I wish him the best of luck this spring winning the punting job at the University of North Carolina. 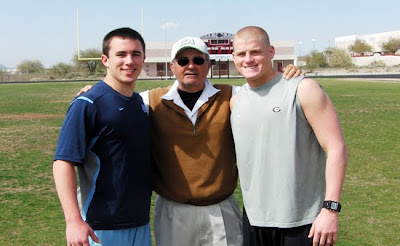 Drew Butler One on One Punting 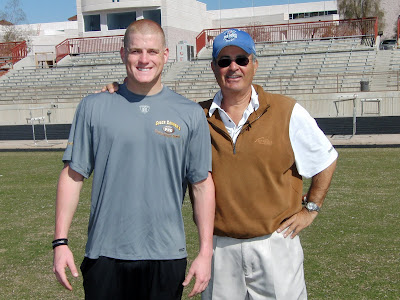 Last week for four days I had Kevin Butler and his son, Drew in Scottsdale, Arizona for some One on One Punting Lessons.
Many years ago when Kevin Butler was the kicker for the Chicago Bears, I was hired by Head Coach Mike Ditka as a Kicking Consultant to coach both Kevin Butler and punter Chris Gardocki.
So, Kevin and I have known each other for a long time.
Last year in March, Kevin brought his son Drew to Scottsdale for some One on One Punting Lessons because Drew was competing for the starting punting job at the University of Georgia with a couple of other punters.
Drew's goal was to be the starter and his father knew I could take his punting skills to the next level.
Drew not only had a couple of One on One Lessons but also attended my Pro Development Camp during the summer at Macalester College in St. Paul, Minnesota.
After just working with Drew for a couple of lessons and seeing the improvement he made and the potential he had as a sophomore I said, "If you focus on everything I'm teaching you and get fundamentally sound you will be playing in three years on Sundays.
He looked at me with a surprise look on his face and said, "You really think so."
Last year as a red shirt sophomore at the University of Georgia, Drew Butler had a remarkable season and averaged 48.8 yards. He not only lead the nation in gross and net punting but went on to win the prestigious 'Ray Guy Award'. 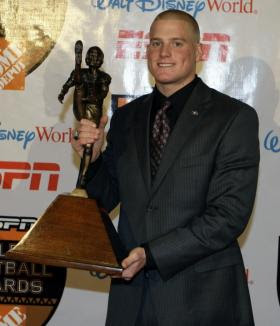 Drew Butler Wins Prestigious 'Ray Guy Award'
Kevin as a former NFL kicker knows how hard it is to make it to the NFL. That is why he brought his son back for additional One on One Lessons. Kevin and Drew both agree there is always room for improvement.

Also, during this time Kevin's former teammate from the Arizona Cardinals and good friend, Jeff Feagles and his son where in Scottsdale also for some One on One Punting Lessons. 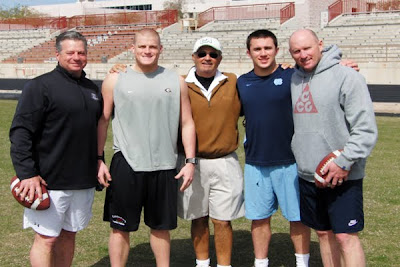 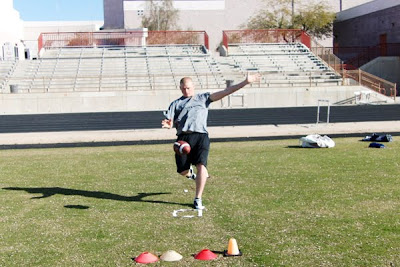 After completing three days of drills and video review, Drew was starting to look more and more like Ray Guy with his follow through. 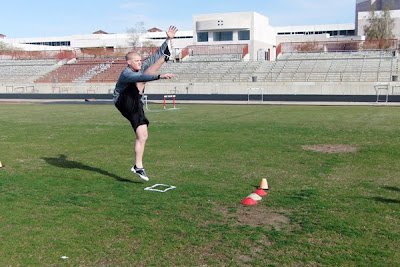 For Drew and any young punter or kicker the key to success is solid fundamentals and hard work. You can work hard but if you don't have the correct fundamentals your challenging yourself in reaching your potential goal . Drew is working smarter and his punting technique is getting smoother.

Click below and listen to Kevin Butler talk about Drew's One on One Punting Lessons and training with Coach Zauner.

Once again it was a pleasure seeing and working with Kevin and Drew.

On a side note, Drew and I tied scores once again on the golf course so my record is still perfect. No one has beat me yet in match play and I hope to keep my record in tack. 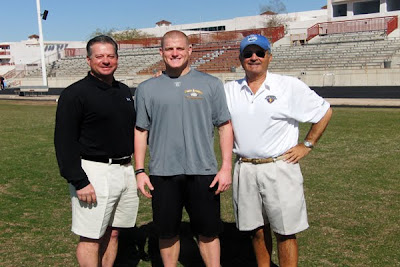