Kicking Lessons and PRO Development Camps
produce results for U of Michigan's
Senior Kicker, Brendan Gibbons
For the last two years Shawn Gibbons has invested his time, energy and money to help his son be the best he can be as a college kicker.  Of course what else would a father do for his son.
After Brendan started his college career at the University of Michigan with a 1 of 5 field goal start he  and his father Shawn started to check out kicking coaches around the country.

Michigan had just changed head coaches and special teams coaches and Brendan was hoping for a new start.  After zeroing in on a kicking coach Brendan's father Shawn decided to try the Coach Zauner, LLC Programs.

In 2011 they attended Coach Zauner's January PRO Development Camp for kickers.  They followed it up with One on One Kicking Lessons in March, June and July.  They invested time and money and liked the improvement Brendan was making.
In the fall Brendan competed in training camp with other kicking specialists and came out on top becoming the starting kicker for the Michigan Wolverines under new Head Coach Brady Hoke.

It's been a real pleasure meeting and working with Brendan and I wish him the best of success in the future.

I first met Sergio Castillo, Jr. in 2010 when he came to Scottsdale, Arizona for a One on One Kicking Lesson. Since that time he has come back every year for repeated One on One Lessons to improve his technique and attended PRO Development Camps to get competition.

In the three years I have been working lessons and have the opportunity to be around Sergio, I can say this young man has a passion for kicking and is committed to becoming the best he can be, not only on the field but also as importantly academically. He has been a pleasure to work with and I can say I only wish the best for him and his family.

I know Sergio and his mother have sacrificed and saved money to attended PRO Development Camps and to continue taking One on One Kicking Lessons because his goal is to become the best college kicker he can be and have an opportunity to play in the NFL.

Each year I see improvement and which he continues to receive awards. Congratulations to Sergio for achieving another award for his kicking excellence after his junior season at West Texas A & M.
3 Buffs players named Daktronics First Team All-America

In addition to Westbrooks, Buffalo junior place kicker Sergio Castillo, Jr., and senior offensive lineman Manase Foketi were named to the first team. The Buffs had the most first team selections with three and were one of five teams with three selections total between the two teams....
Castillo, Jr., connected on 20 of 23 field goals for the year, including two from over 50 yards and a career-long 56-yarder versus Abilene Christian. He is tied for ninth nationally at 1.33 field goals per game. He was a perfect 16 for 16 in attempts of less than 40 yards to earn top place kicking honors. He average 8.6 points per game ranking 34th nationally. He was a league-best 69 of 70 in extra points.

Click here to read this article in it's entirety.

As a football kicking coach I am grateful to have had the immense pleasure of watching Sergio develop into a fine young man on and off the field.

And The Winner is... Fordham Kicker Patrick Murray

In 1936, Vince Lombardi played right guard for Fordham University. Lombardi’s position coach was Frank Leahy. Even 76 years later, the legendary nickname for that Fordham offensive line still sits at the tip of at least one Rams player’s tongue at the first mention of Lombardi. 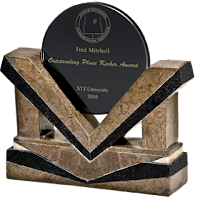 “He was one of the Seven Blocks of Granite,’’ Fordham senior kicker Patrick Murray recalled proudly. “To have somebody like Vince Lombardi associated with this program inspires everybody in it to this day.’’

To this day, daily inspiration for Murray and his Fordham teammates comes from a collection of Lombardi sayings posted on a wall in the Rams’ locker room. Of all the powerful words for any football generation Fordham’s most famous
alum has used to motivate players all over America, Murray recited his favorite without hesitation.
“The best one is, 'I never met a man worth his salt who didn’t appreciate the grind,'" said Murray, this year’s winner of the Fred Mitchell Award honoring the top place-kicker among 750 FCS, Div. II,, Div. III, NAIA and community colleges. The honor that rewards exemplary performance on sports and off the field is named for the Tribune’s longtime columnist, a Wittenberg University Hall of Fame placekicker.

Click here to read this article in it's entirety.

On Saturday I received an email from Jeremy Jonas who at the present time is deployed in Afghanistan. 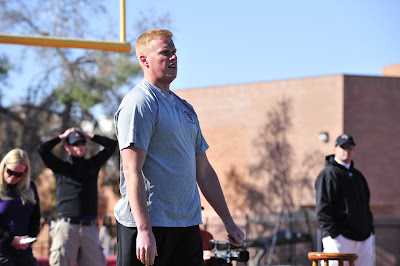 I first met Jeremy in the spring of 2012 when he visited for a One on One Snapping Lesson looking to qualify for my Free Agent Specialist's Kicking Combine.   At 6' 6 260 pounds Jeremy definitely had the size NFL teams want but lacked the snapping consistency.
While serving for his country Jeremy also worked on refining his snapping skills, trying to qualify for the Free Agent Combine.  When Jeremy came back for the Combine he had definitely improved.

About a month after the Free Agent Combine, Jeremy was deployed to Afghanistan and is there defending our country and training others to defend theirs.

My thoughts and prayers are with Jeremy as he serves and defends our country in a foreign land. Just wanted to share a short email from Jeremy and his thoughts with you:


Today marks the 113th matchup between one of America’s most storied college football rivalries.  Army vs Navy.  With that, football is once again foremost in my mind.  I’m sure you will enjoy this photo taken to commemorate today's game as I watch it for the first time as a deployed soldier.  It’s truly amazing to finally see firsthand the impact of the game on soldiers and morale on this tiny FOB here in Afghanistan.  As it stands, we have less than 75 days until we return back stateside.  Since we landed here in June, our sole purpose has been to train and mentor the Afghan Uniform Police, improving them technically and tactically.  As with all things, the mission has had highs and lows but there is finally light at the end of the tunnel.  I look forward to returning home and sharing my experiences here in Afghanistan with you.  I have been able to continue working out in prep for the upcoming 2013 combine.  My return date is scheduled for February 22nd, and sometime following I would like to visit for a one on one lesson prior to the combine to fine tune some things.  Please let me know if anything is available.  I look forward to hearing from you.

Long Snapping Lessons
Posted by Gary Zauner at 11:15 AM