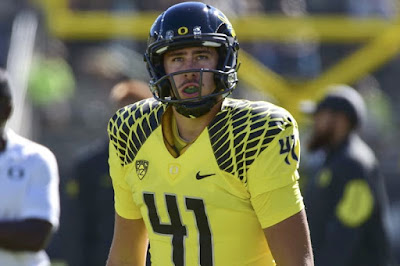 I first met University of Oregon Kicker, Aidan Schneider about three years ago when  he came to Fountain Hills, Arizona for a ONE on ONE Kicking Lesson.  Since that first meeting we have probably seen each other at least two if not three or four times a year including ONE on ONE Lesson and PRO Development Camps.


Aidan is 6'4 235 pounds and is big man compared to most kickers.  He has a soccer background and at our first lesson loved Coach Zauner's philosophy of teaching 'A Natural Style of Kicking'.
Every year I have seen Aidan improve his technique and take his game to the next level.  As a sophomore he was a Lou Groza Semi Finalist.  He not only came to Arizona for ONE on ONE Lessons but also attended my PRO Development Camps in January and May in Arizona and July in Wisconsin.  His dream like many young kickers is to play in the NFL.
Well, Aidan has just completed his senior season.  When the University of Oregon Football Team was  a Powerhouse Aidan had a lot of kicking opportunities. In the last two years Oregon has struggle and therefore Aidan has limited amount of field goal attempts.

Despite his reduced number of field goal attempts each year he has continued to improve as a field goal kicker and kickoff specialists. 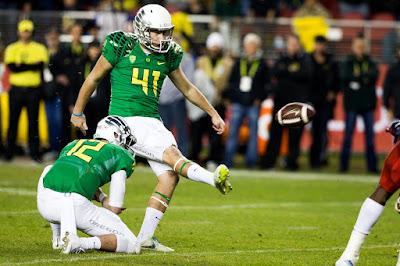 Aidan was not invited to play in any post season Bowl Games like the Senior Bowl, East / West Shrine or NFLPA Collegiate Bowls. However, I believe Aidan is an NFL prospect.  In February he will be attending Coach Zauner's 2018 College Senior Combine to prove to NFL Teams that he has NFL potential.

I wish Aidan the best of luck in the future and to keep following his dream to some day play in the NFL.
COACH ZAUNER'S PROGRAMS ARE
'A SPECIALIST'S PATH TO PRO FOOTBALL' 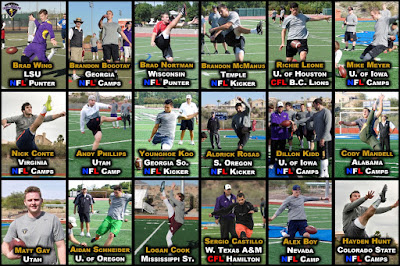