On November 22nd, Spencer Lanning became the first player since 1968 to punt, kick an extra point and throw a touchdown pass during an NFL game. It sounds crazy because, well, it is.
You could say it was a very special Sunday for the Brown’s special team standout.  Not only did Spencer’s efforts help Cleveland defeat Minnesota, his performance also earned him recognition as the AFC Special Teams Player of the Week.


It’s safe to assume that the former South Carolina punter is living on cloud nine right about now. Who wouldn’t be? It would be wrong to assume, however, that the road to the promise land wasn’t full of detours.
Coach Zauner first met Spencer Lanning after his senior year at the University of South Carolina.  As a junior, the Lou Groza semifinalist realized that playing professional football was a real possibility and he was to take his game to the next level.

Spencer came to Coach for ONE on ONE Lessons, wanting to sharpen his skills and improve in areas that had caused him issues in the past. Through recording drills and assessments, Coach Zauner was able to pinpoint strengths and weaknesses in Spencer’s technique in order to successfully map out his ‘Specialist’s Path to PRO Football’.
After several ONE on ONE Lessons, Spencer Lanning was ready to prove himself to NFL coaches and scouts. With a former coach and respected member of the football community in his corner, Spencer was prepared for the road ahead.
In 2011, Spencer was signed as an undrafted Free Agent to the Chicago Bears.
In 2012, he was signed as a free agent to the Jacksonville Jaguars…
…then picked up off waivers by the New York Jets and then by the Cleveland Browns.
Then Coach Zauner recommended Spencer to the Sacramento Mountain Lions of the UFL.  Unfortunately the league folded after four games.
Finally in February 2013, Spencer Lanning made a landing in the Buckeye State as the Cleveland Browns re-signed him as a free agent.
It was anything but smooth, but I’d be willing to bet that Spencer is perfectly fine with where the ‘Specialist’s Path’ he took to pro football. 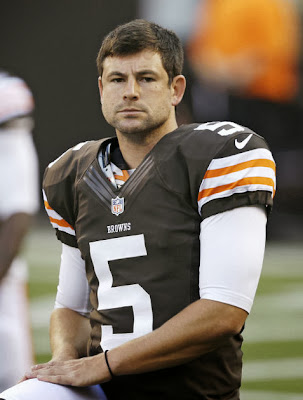 We couldn’t be happier with his recent accomplishments and are grateful to have played some small part in his extraordinary journey.
Spencer Lanning’s story exemplifies what is possible with drive, dedication and a willingness to learn. Coach Zauner started his specialist camps and programs to create a ‘Field of Dreams’ where aspiring players could learn what it takes to make it to the next level.

We’ve all heard the saying, “where there’s a will, there’s a way” and we’re here to help you find your way down a ‘Specialist’s Path to PRO Football’. Check back for future updates on Spencer Lanning and visit www.coachzauner.com for more information on PRO Development Camps, Free Agent Kicking Combines, College Senior Combines and ONE on ONE Lessons.
Don’t forget to ‘friend’ us on Facebook for info on all the latest info on all of Coach Zauner’s events.