Andre Szmyt Syracuse Freshman Kicker
I first met the Szmyt's family (Andre, Lala and Eric) about two years ago in Milwaukee, Wisconsin. I received a phone call from Lala and Eric Szmyt about their son Andre (Vernon Hills High School) about some ONE on ONE Kicking Lessons. 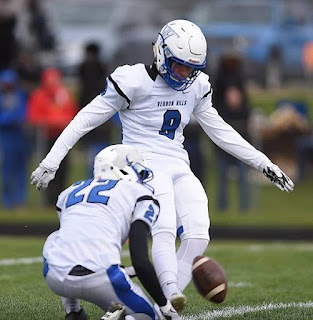 As Andre warmed up I could tell this young man had kicking talent. Andre had gone to a couple other kicking coaches and camps and mentioned he didn't like what they were teaching him.  He didn't feel comfortable!

Coach Zauner teaches a 'Natural Style of Kicking and Punting' and Andre said he felt more comfortable kicking with those mechanics.  After high school Andre made a decision to walk-on at Syracuse.  He had a good but not great spring practice. 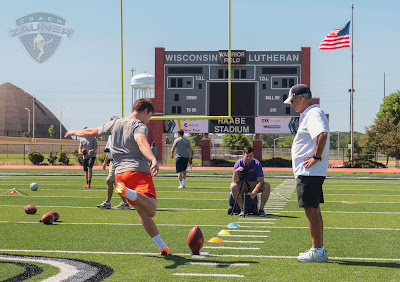 This summer again, Andre was again in Milwaukee, Wisconsin for more ONE on ONE Lessons and also attended Coach Zauner's July PRO Development Camps for Snappers, Punters and Kickers Camp for College, Free Agent and Elite High School specialists. His goal was to be the starting kicker at Syracuse. 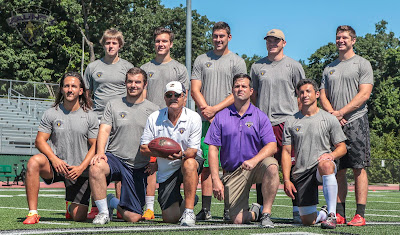 Well it just goes to show that hard work pays off!  I must say that a big part of Andre's success is his parents (Lala and Eric Szmyt's) support and guidance. Without them researching kicking lessons on google I probably would never had the chance to coach such a fine young man. 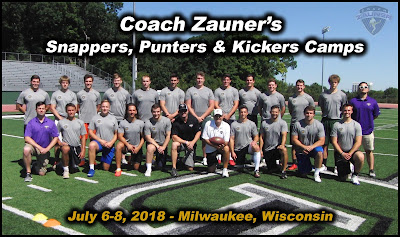 Congrats To Andre For His Early Success This Season! I Also Wish Him and His Syracuse Orangemen Continued Success The Season.

Check out this article about Andre from a Syracuse Daily Orange Writer. 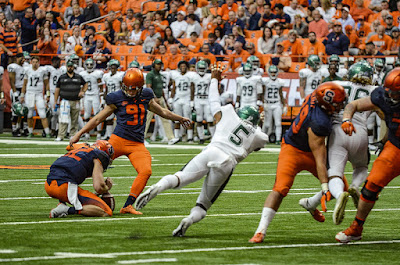 Article by Matt Liberman Staff Writer of Daily Orange
When Andre Szmyt lined up for a 50-yard field goal last Saturday, his mind went blank. While cheers echoed around the Carrier Dome, Szmyt’s ears heard silence. He’s taken so many kicks at this point in his life, it’s simply muscle memory.
“Sometimes I don’t even remember the kick. I don’t hear anything when I’m out there,” Szmyt said. “(I’m) just staying consistent and trying to make all my kicks.”
Szmyt’s 50-yarder was part of a perfect 4-for-4 start to the season. Consistency is what has vaulted the preferred walk-on from a redshirt in 2017 to the starting kicker for Syracuse (2-0) this season. He replaces Cole Murphy, who played 48 games as SU’s No. 1 placekicker. In fall camp, Szmyt was the most accurate kicker on the team and has continued to make kicks in the team’s first two games this season, splitting the uprights on four field goals in four attempts and nailing every extra point.
“He never missed,” SU head coach Dino Babers said of Szmyt’s fall camp. “He kind of came out of nowhere.”
Although Szmyt’s father, Eric, grew up in Massachusetts as a Patriots fan, Szmyt’s mother, Lala, is a first-generation immigrant from St. Petersburg, Russia, where soccer is king. Szmyt’s great-great uncle on his mother’s side was the starting goaltender on the Soviet Union national team, Eric said. That was the only sport that Szmyt really grew up playing competitively, he said, controlling the top of the pitch as a striker.
“He had played soccer since he could remember … since he could walk,” Eric said. “He did all the travel teams and all that good stuff through most of high school.”
By the end of his junior year of high school, he thought he could go further as a kicker than playing soccer. But it was a transition that Lala didn’t understand. She knew soccer, not American football. She’d never watched it, Szmyt said, so she assumed that the switch would mean that he would be getting hit and tackled.
Szmyt and Eric eased Lala’s anxiety by explaining the role of the kicker and showing her videos.
“She was like, ‘OK. It’s kind of like soccer,’” Szmyt said.
At the end of that year, Szmyt and his friends on the football team went to the field to film him kick. The year before, Vernon Hills (Illinois) High School had some difficulty kicking, Eric said. Then their coaching staff saw a video of Szmyt drilling three consecutive 50-yarders, and he immediately had a spot on the team.
His senior season, Szmyt connected on 75 percent of his field goals, earning all-state honorable mention honors. Additionally, he earned a four-star rating from Kohl’s Professional Camps, the top training camp in the country for kickers, punters and long snappers
His performance at Vernon Hills and in camps earned him recognition from Division I schools around the country. Much of his senior year was spent talking to coaches, just a few months after he decided to give up soccer.
“It was pretty sudden,” Eric said. “It was obvious that he had the talent and ability to do this right from the get go.”
Less than a year and a half after deciding to play football, Szmyt found his place at Syracuse as a preferred walk-on, redshirting his freshman season. Heading into 2018, Sterling Hofrichter appeared to be the starter, and when Eric dropped Szmyt off at SU for fall camp, Szmyt hoped to compete for the kicking job, Eric said. Soon, he surpassed his competition.
“We keep numbers on all our kickers … his numbers were extremely high,” Babers said. “Based off of those numbers, we wanted to exercise some drills that we could do to see if he could handle the pressure, added pressure in practice and still kick with the same high percentage, which he did.”
Those numbers earned Szmyt the right to start against Western Michigan, which he didn’t even know he’d be doing until he saw the depth chart the week before. Two games later, he has yet to miss a kick, whether it be a field goal or an extra point. The 50-yard field goal he kicked against Wagner split the uprights with several yards to spare.
“I had no doubt that he had the leg to hit the 50-yarder, it was just a matter of whether it was going to be through the goal post or not,” Babers said. “It may not have been straight down the middle. But it wasn’t very far off from straight down the middle. Fantastic kick by him.”
Babers nearly sent Szmyt out for a 54-yard kick against Western Michigan, but Szmyt had been perfect on the day and Babers didn’t want to potentially spoil his debut with a miss. Babers said after the game he met Lala, who was “going crazy” with pride.
“It was like the excitement of him coming on the scene in high school all over again,” Eric said.
For Szmyt moving forward, the mindset remains the same as it was entering this season: just stay consistent.
“Staying focused, level-headed and not letting misses affect you,” Szmyt said. “Gotta do my job. I’ve been working all fall camp to get this opportunity, just have to take advantage.” 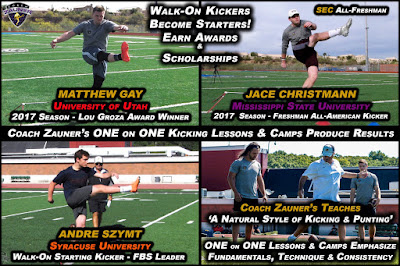 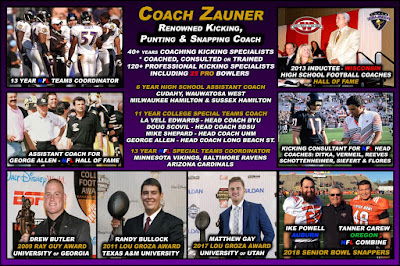 Coach Zauner's Programs Are
'A Specialist's Path To PRO Football'