I first met Sergio Castillo, Jr. in 2010 when he came to Scottsdale, Arizona for a One on One Kicking Lesson.  Since that time he has come back almost every year for addiitonal kicking lessons to improve his technique and also to attend the PRO Development Camps to get competition.

I am proud to announce Sergio is the recipient of the 2013 Fred Mitchell Award. The Award is provided to the nation’s top place-kicker in FCS, Division II, Division III, NAIA and NJCAA for excellence on the football field and in the community. Over 750 place-kickers are eligible.

The Award is named for Fred Mitchell, the All-American place-kicker from Wittenberg University and longtime sports columnist for the Chicago Tribune. Mitchell said, “It is a thrill to congratulate Sergio as the first Division II kicker to receive the Fred Mitchell Award. With more than 750 place-kickers to choose from, we are extremely proud to recognize Sergio among a stellar group of nominees. Sergio’s record-setting season and career are very impressive. He led the Buffs in scoring while playing a key role in the team’s successful playoff run and 11-3 record. He is a very accurate kicker, having made 62 of 79 career field goals and 251 of 255 extra points. Sergio has focused his community service efforts on mentoring young people.

Sergio volunteers weekly in the Students in Free Enterprise program to assist troubled youth with math, life lessons, college planning and job interviews.  He is a regular speaker in Amarillo in the Step Up to Success program, where he counsels high school and middle school students.  As a Toys for Juarez volunteer, he collects and distributes toys to children in Juarez, Mexico. He is a Huddle Leader, member of the football team’s Bible study and Fellowship of Christian Athletes member.


As you can see from the photos below Sergio started One on One Kicking Lessons with the typical head back and crunching style of kicking which is coached by many kicking coaches around the country.
Sergio has now adopted Coach Zauner's Natural Style of Kicking and Punting in which the torso stays more upright so he can kick and punt up and through the ball much easier.

Since 2010 Sergio has continually improved and matured as a person and kicker.  His mother has supported him in every way possible. Saving money for kicking lessons and kicking camps so her son could be the best he can be.
As a teacher and kicking coach I must say that Sergio Castillo was very coachable and a quick study.  He picked up the Natural Style of Kicking and Punting quickly and worked hard to master it.  His college stats and record speak for itself.

I want to commend Sergio Castillo for his hard work in the past four years and congratulate him on his recent accomplishment as a First Team All American Place Kicker and now winning the 2013 Fred Mitchell Award. As a parent his mother must be very proud. Way to go Sergio!

Sergio will be honored on February 17, 2014 during the National Football Foundation Chicago Metro Chapter Awards Ceremony. 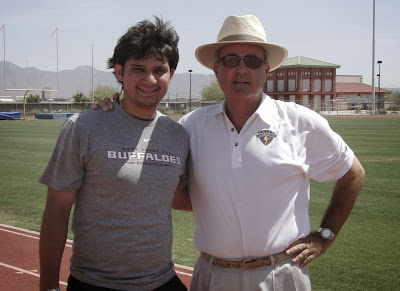 A Free Agent's "Field of Dreams"
All too often, specialists were getting lost in the shuffle when forced to share the spotlight with hundreds of flash-and-dash position players in the NFL Combine. The limited exposure for special teams players and lack of post-combine success stories presented a huge problem for aspiring kickers, punters and snappers..
In 2008, Coach Gary Zauner and Joe Marciano started searching for a solution.


They envisioned a "Field of Dreams" where elite specialists would have the opportunity to compete for roster spots in the NFL/CFL and in 2009, Coach Zauner’s Inaugural Free Agent Specialist’s Combine was born.
Professional scouts, coaches and personnel directors convened in Phoenix, Arizona to evaluate the 41 participants invited to showcase their skill set. The two-day event was a roaring success, yielding the likes of Pro Bowl kicker, Billy Cundiff and proving that Coach and Marciano may know a thing or two about assembling a talent pool.
Four years later, the Free Agent Specialist's Combine continues to produce results beyond expectations, lending credence to the tried and true benefits of the specialist's “Field of Dreams”. 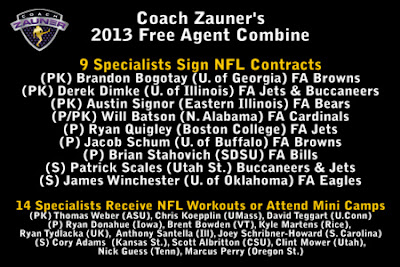 In 2013, 9 specialists, including Ryan Quigley, Brandon Bogotay and Derek Dimke, signed NFL contracts and an additional 14 participants were invited to NFL workouts or mini camps.
Coach Zauner has developed a unique eye for talent through coaching and consulting over 100 NFL/CFL athletes. He is well-respected in PRO coaching circles and relied upon because of the quality of kicking, punting and snapping specialists he recommends, not the quantity of combine participants.
Teams looking to fill roster spots are looking for PRO-ready athletes and that's exactly what the Free Agent Specialist's Combine offers. For years, some of the best specialists in the country were overlooked because scouts were unable to effectively sift through the talent at the NFL Combine.
The exclusivity of the Free Agent Specialist’s Combine ensures that every participant is afforded the opportunity to be seen and evaluated by the numerous NFL/CFL coaches and scouts in attendance.
Since leaving the NFL, Coach Zauner has dedicated himself to connecting PRO personnel and high caliber athletes of all age levels. Since 2009, Coach Zauner programs have expanded to include the College Senior Specialist’s Combine, High School Kicking Camps, PRO Development Camps and One on One Lessons.
The 2014 Free Agent Specialist’s Combine is the "Field of Dreams" Joe Marciano and Coach Zauner imagined in 2009. Now, the country’s elite kickers, punters and snappers have a platform to prove themselves worthy of a roster spot.
But don't take our word for it...
Listen and read testimonials from current and former NFL players and coaches by checking out the video testimonials by various NFL specialists on www.coachzauner.com and learn how to walk the ‘Specialist’s Path to PRO Football’  this March 2014 at   Coach Zauner’s Free Agent Specialist’s Combine  in Phoenix, Arizona! 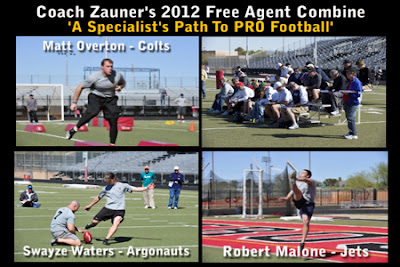