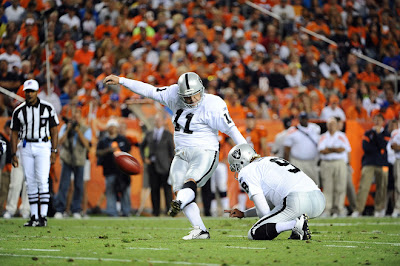 
Around this time of year I like to take a little break from camps, combines, and One on One Lessons, and spend a little time with my wife Michelle at our cabin in Show Low, Arizona. This past Monday was the opening Monday Night Football Game of the season, which featured a battle between the Oakland Raiders and Denver Broncos.
Even though now I am just consulting, I still like to watch football games that features coaches and players that I have had associations with when I was coaching or consulting. This particular Monday Night Football Game included the Oakland Raiders’ Special Teams Coordinator John Fassel and kicker Sebastian Janikowski.
I have had the privilege of working with both John Fassel and Sebastian Janikowski as a coach and consultant. When I was the Special Teams Coordinator for the Baltimore Ravens, John was my assistant Special Teams Coach, and after the 2007 season, Sebastian came to Scottsdale, Arizona, for a three day One on One Kicking Lesson to improve his accuracy on long field goals.
On this particular Monday Night Game, both John’s Special Teams and Sebastian made some big plays. John's Special Teams unit blocked a punt for a touchdown and both his kicking specialists played exceptional. The eight time PRO Bowler and NFL's All-Time Leader in career punting average, Shane Lechler had 6 punts for a 58-yard average and Sebastian Janikowski added three field goals of 37, 21 and 63 yards. His 63-yard field goal tied an NFL Record for the longest field goal, sharing it with Tom Dempsey and Jason Elam. 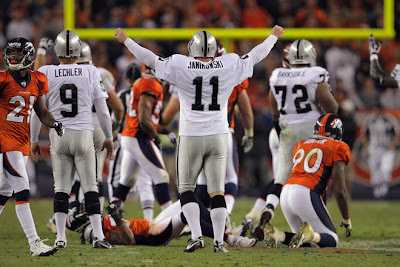 2008 One on One Lesson with Sebastian Janikowski
In 2007, Sebastian Janikowski kicking percentage was 71.9% (most misses from long range) and his contract was ending in two years.  He and his agent wanted him to improve on his field goal percentages for better contract negotiations. Sebastian and his agent felt that improving his long field goal accuracy would achieve this goal.
In June of 2008, Sebastian came to a sunny and hot Scottsdale, Arizona, for a three day One on One Kicking Lesson to improve on his long field goals. During these three days, I was amazed in how powerful his leg was and how good his natural kicking skills were.  Also, he was really a good guy and very coachable.
My comment to Sebastian after watching him kick the first day was: "Lets not just get better kicking long field goals but work on a kicking technique that will make you a better all around kicker from all distances."
After his One on One Lessons, Sebastian improve his field goal percentages each year. He improved to 80% in 2008 and had a banner year in 2009, hitting 89.7% of his kicks. It was after the 2009 season, his goal was achieved when he signed a new contract making him not only one of the top paid kicking specialists in the NFL, but one of the elite NFL kicking specialists. 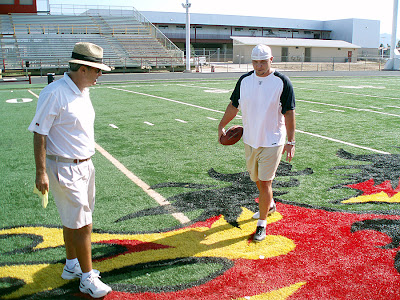 Coach Zauner One on One Lesson with Sebastian Janikowski 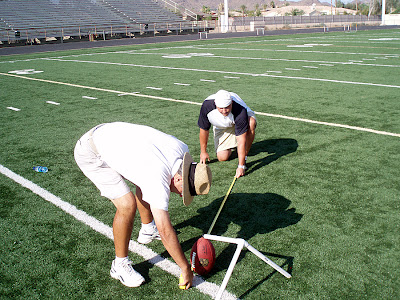 Comments From Coach Zauner's One on One Lesson with Sebastian:
The first day I watched Sebastian, I thought he was kicking too hard and out of control while many of his kicks had too much movement. In other words, his ball was hooking too much.
The next two days we worked to refine Sebastian's field goal technique. We worked on his approach angle and kicking a straight ball rather than playing a long ball hook, and using the same leg swing no matter where the attempt was on the field. Note: Most long kicks will draw a little, but his kicks had way too much movement to be consistent from long range.
I told Sebastian that because he arguably has the strongest kicking leg in football, that he should treat kicking field goals like hitting a golf ball, under control. Sebastian told me he was about a four handicap so he understood my analogy.
"Throw your driver out of your bag and just use your three wood, because you hit your three wood further than most people hit their drivers.” I then said, “Now just use one swing that is more under control and your consistency will improve. You will hit more fairways in golf just as you will make more field goals and raise your percentages in kicking a football.”
At the end of his three day One on One Kicking Lessons, he was kicking with one swing, under control, up and through the ball, finishing down field, and very happy with the results.

One on One Lessons Results:
In the last three years, I have watched several former One on One kicking students improve after their visit. Sebastian Janikowski  (Oakland Raiders), Billy Cundiff (Baltimore Ravens), Josh Scobee (Jacksonville Jaguars), Rian Lindell (Buffalo Bills), Garrett Hartley (New Orleans Saints), and Nick Novak all have come to Scottsdale, Arizona for One on One Kicking Lessons, and all have left with knowledge and worked hard to become a better kicker.
As a retired coach and now a kicking consultant, my satisfaction as a coach and teacher comes from seeing my student specialists improve or fulfill their dreams by making NFL, CFL or UFL rosters.

As I tell all prospective specialists trying to make an NFL roster:  "It's not easy to get into the NFL and it maybe even harder to stay in the NFL."  "You can never have a bad day or you will be gone.  The NFL stands for "Not For Long"

Hard Work Pays Off:
Today, I just called to congratulate Nick Novak after signing with the . Nick has worked One on One Kicking and Kickoff Lessons the last two years, attended my PRO Development Camp and Free Agent Specialist's Combine. Congrats to Nick for his hard work, perseverance and getting back into the NFL!
Sebastian Janikowski Video:
Click below to view a short video of Coach Zauner working with Sebastian during his One on One Lesson in the summer of 2008. During this short video you will see Sebastian warm up with a One Step Drill. He progresses all the way back to 60 yards. He finishes the day with 65 and 67-yard field goals from the right and left hashes.


Best of luck to John Fassel, Sebastian Janikowski and the Raiders Special Teams Units this season.

Coach Zauner’s goal is to emphasize a ‘Natural Style of Kicking’ while helping specialists reach their dream of playing PRO football, but it’s the players in the end that deserve the credit for their achievements. 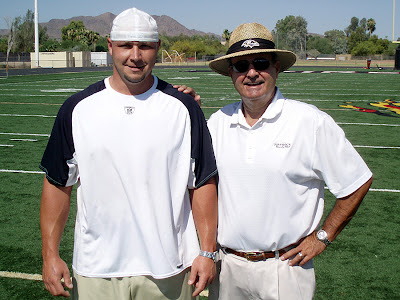 Sebastian and Coach After 2008 Lesson in Scottsdale, AZ


By Associated Press, Friday, September 2,2011
The Cardinals’ dissatisfaction with Graham became clear nine days ago when the team signed Zastudil, who missed all last season with a knee injury. Zastudil punted for Baltimore and Cleveland with a career average of 42.7 yards per punt in 113 games.
“Dave has a body of work that we’re familiar with,” Whisenhunt said, “punting in the AFC North and in those conditions and being a successful punter. That was part of the information that we had going in. We needed to see him actually do it in the game for us, and he was impressive in the first half (Thursday night). That went a long way in answering some of those questions.”
Zastudil punted twice for an average of 47.5 yards in Thursday night’s 26-7 victory over Denver.