In 2012 Johnny Hekker from Oregon State University and 4 time PRO Bowler attended this same combine to get NFL exposure and signed a Free Agent contract with the Rams after his Draft. 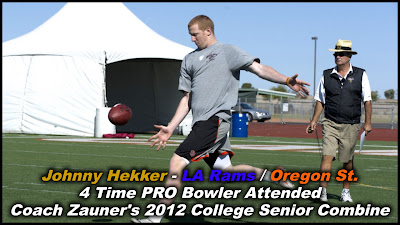 Coach Zauner's Programs are designed to be 'A Specialist Path to PRO Football' ® I believe with Jamie's hard work and talent, he will achieve his goal of playing in the NFL like many of the names I mentioned above. 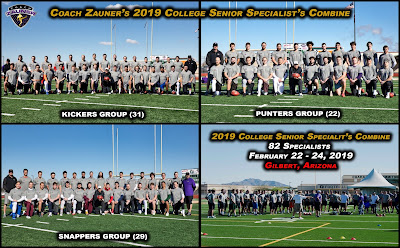 I first met Jamie Gillan at Coach Zauner's 2019 College Senior Combine which was held February 22-24 in Gilbert, Arizona.  Over the last couple of months of getting to know him even better, all I can say is "What A Nice Young Man and very talented punting specialist".

Jamie definitely showed me that he had NFL potential and was ranked as a 1A NFL Prospect along with 13 other graduating seniors.
I believe what helped Jamie and all the other NFL prospects recommended get maximum exposure to NFL Teams was their workout videos were hand delivered or given to all the NFL Special Teams Coordinators, Assistant Special Teams Coaches, Directors of PRO Personnel and NFL Scouts attending the Free Agent Combine March 10-12,  2019 also in Gilbert, Arizona.

Not only was their workout videos given to the NFL Teams in attendance but I also talked about each specialists.  I mentioned that Jamie the (Scottish Hammer) was a real sleeper in the draft and if you didn't know about this young man you need to check out his combine video.  He had more 5+ second hang time punts over the three day event than any other punter ever attending any previous combines.
A couple of NFL Special Teams Coordinators called me about several players but Jamie's name was mentioned a lot!  Prior to the NFL Draft several teams went to Arkansas and did private workouts with Jamie.

In 2018 Coach Zauner's College Senior and Free Agent Combines and ONE on ONE Lessons produced (8) Starters on NFL Rosters. 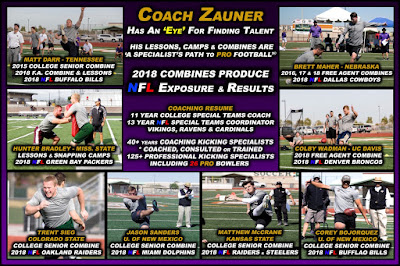 This year 82 Specialists attended Coach Zauner's 2019 College Senior Combine to show case their talents with an end result of getting Exposure to NFL and CFL Teams. To date from this years class (8) specialists have signed NFL contracts and (15) more have received invites to NFL Mini Camps.
Below is a testimonial by the Jamie Gillan, University of Arkansas at Pine Bluff punter after attending Coach Zauner's 2019 College Senior Combine. After the 2019 NFL Draft, Jamie signed a Free Agent Contract with the Cleveland Browns.

I wish Jamie and all the other specialists that attended either my Free Agent or College Senior Combine the best of Luck in pursuing their dream to play in the NFL.

Coach Zauner's Programs Are 'A Specialist's Path To PRO Football' ® 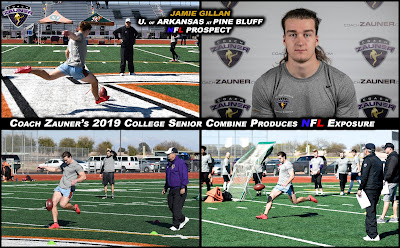